We (two brothers) will showcase their 3D printing projects.
The first project, by the older brother, is a scale 1:25 fully 3D printed 180-seater passenger aircraft. This is a static model which showcases the aircraft structure which is commonly hidden under the skin. The goal of this project is to create a large scale model to demonstrate how an aircraft structure is build up in actual currently in use passenger aircraft.
The second project, by the younger brother, is a fully 3D printed rocket designed to allow it to be launched. It will have a thrust vector control system to control the rocket.

Both projects will be displayed and we will be present at our stand to discuss the design, materials used and production process. We are looking forward to receive input and ideas from other people and to hear what they think about our projects. The actual models will be supported by laptops showcasing the 3D models and sliced 3D printing models. 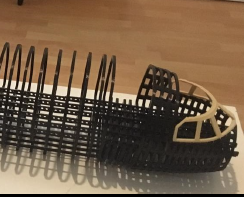